Solar Batteries and the Electrical Grid 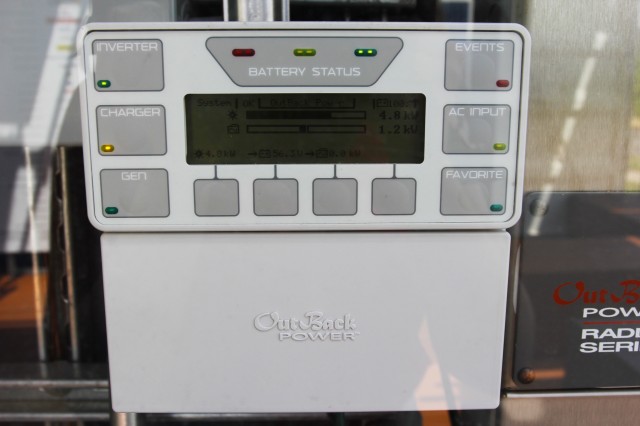 The battery system at the recent Sun Pavilion exhibit at the Nelson-Atkins Museum of Art, housed there this summer.[/caption]

On July 31st, citizens of India were thrust into a massive, enduring blackout – an experience that is unfortunately all too common there. In fact, the New York Times reported that it “helped highlight a basic fact of life in the country: may people [there] do not have access to reliable electricity.”

Indians have taken to keeping diesel-powered generators handy for incidents of grid-power-down, but even with government subsidies for diesel fuel, the generators are expensive to run, not to mention dirty. And while many businesses and individuals do have to resort to the generators for back-up, for many Indians, they’re simply not an affordable option – and they’re not simply back-up, either.

The expansion of grid-access is a slow-moving beast in India and many villages don’t have access to grid-electricity – nor the funds for the aforementioned generators. This leaves many citizens burning driftwood or kerosene for light – an often dangerous, low-quality, and still expensive method of energy source.

There are two sides to the good news story though: a growing renewable energy market and aggressive clean energy goals in India, as the country moves to light up it’s entire country – along with a growing number of businesses who are making solar energy and lighting affordable and accessible for poor and off-grid villages, households, and businesses.

Take, for example, solar micro grid service, the Mera Gao Project – whose goal is to bring light to 70 villages by the end of 2012. They work by providing one micro grid solar system – consisting of two solar panels, two batteries, and four distribution lines – for $1,200. Each household pays about 25 rupees per week for the service – cheaper than the 30 rupee average they would pay for kerosene each week, and cleaner too.

And then there’s The Energy and Resources Institue, or T.E.R.I., whose “Lighting a Billion Lives” campaign works by training one woman in each village to handle and charge solar lanterns, renting them out to villagers by night; a much more affordable option than individual purchase of lanterns, which can cost as much as $80.

These particular projects are built to function off-grid – hence, the micro grids, batteries, and generators – and bring further light to the disparity between India’s situation and our own electrical grid.

But perhaps we should back up.

Solar Batteries in the U.S.

A micro grid is a smaller, individual-sized version of our own central, utility-controlled grids – a system of energy production and distribution that was cooked up by the same man who invented our modern light bulb – Mr. Thomas Edison.

For readers who visited Kansas City’s Nelson-Atkins Museum this past summer, the Sun Pavilion installation offered a good look at how an electrical micro grid functions – and we also spent a bit of time on this blog working through the history and details of electricity, current, and the grid.

One question clients and potential customers often ask of us is, will I need batteries for my solar system? Summer blackouts withstanding, our grid system here in the US is really very reliable, and for most solar systems, it doesn’t make much sense to add a battery – the cost just isn’t justified. And in fact, in order to take advantage of utility solar  rebates, your photovoltaic system must be grid-tied.

Of course there are off-grid exceptions, and if you prefer to have a back-up, a solar battery back-up may be simpler (and cleaner) than relying on diesel-powered back-up generators. You could even take a look at something like this deep cycle solar battery here to give you a better idea of what you could get. However, since you typically won’t be running your entire building off of a solar battery, we use a critical load panel that allows you to run the things you need during an outage. And in the case of a grid-outage, your solar turns over at the flip of a switch.