The Microgrid at the Nelson-Atkins Sun Pavilion 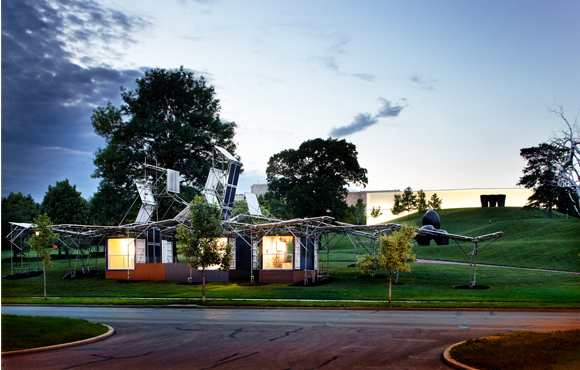 The Sun Pavilion at dusk, with the Nelson-Atkins Sculpture Garden and Bloch Building in the background. Photo credit: Prosser Wilbert Construction, Inc.[/caption]

There’s something in me that is intrinsically drawn to 1890 – 1910 Edison bulbs, and to other beautifully created functional pieces of the time. That function can also be form strikes a chord with me, and I don’t think I’m alone. Lately, hip boutiques and restaurants seem to be incorporating the bulbs into their decorating – like Lawrence, KS’s 715. And you can readily find them for sale at popular home store Restoration Hardware.

Utilities and the Grid

In our last post, we touched on the battle between AC and DC; Westinghouse and Edison. In 1887, Edison had 121 power stations that delivered electricity via DC current to its customers. When Westinghouse came along to rival that, he simply switched to AC current, leaving the central power station model alone.

In Architectural Digest’s review of Generator Studio’s Sun Pavilion at the Nelson-Atkins Museum, they lauded its use of “photovoltaics as decorative elements,” calling it “a point that could influence architects everywhere: design to display, not camouflage, green features.” Green design for the future, you might say.

But the functionality of the Sun Pavilion as a microgrid could also be termed as design for the future. You see, the Sun Pavilion has gone off grid: it produces all the electricity it needs for itself.

Sun Pavilion as a Microgrid

In this way, the Sun Pavilion functions as a microgrid which is essentially local generation of distributed power (versus central). The Sun Pavilion consists of a base made up of shipping containers, with lighting and a small air conditioner for both demonstration purposes and user friendliness. All of this is powered by its photovoltaic solar system.

Well, partially, that is. There are 150 solar photovoltaic panels supported by a unique metal scaffolding system that twists them into an intriguing display. Only 32 of these panels are actually plugged in.* Why? That’s all the Pavilion requires to power itself. And what electricity it produces from sunlight it stores in its battery, making it completely self-reliant.

Now, the Sun Pavilion uses really very little electricity, relatively speaking. It’s certainly possible to take your home or business off-grid. And perhaps we’ll all be off-grid in the future. But on-grid, in states like Massachusetts, net-metering laws have allowed the traditional grid to turn into a two-way street for solar customers. You’re still connected to the existing wires and power plants, yet you use the power you produce first, dipping into the grid when you need more. And in the case that you produce a flux of solar electricity, you can sell that power back to the grid – opening up the possibility that instead of a bill, some months you’ll receive a check.

The World’s Fairs displayed the proud technology of the future. In that tradition, the Sun Pavilion, as part of the Nelson-Atkins exhibit Inventing the Modern World: Decorative Arts at the World’s Fairs 1851-1939, does just that. It’s creators offer a unique perspective of solar technology as form as well as function, and its function represents both self-sufficient and energy efficient power generation. But here’s the kicker: what’s future is already present – solar is no longer futuristic. In fact, you can find it increasingly in use all around you.

*For those of you wondering what’s going to happen to the 118 solar panels not in use in the Sun Pavilion’s functionality, fear not: Brightergy plans to recycle the unused panels and install them in future projects. Which will be sooner rather than later: the World’s Fair exhibit closes this coming Sunday, August 19 – and the Sun Pavilion will come down the following day.