That’s right. We put our own energy data under the microscope to uncover what kind of story it tells. 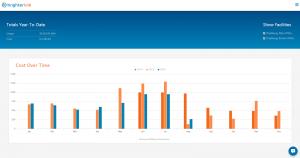 It’s a Tuesday morning at Brightergy’s Kansas City headquarters and the R&D team is having their daily stand-up meeting about the latest sprints and projects for our energy data platform, BrighterLink. There’s little standing, but the conversation is easy, meandering into laughter or passionate disagreement, always gently guided back on course by CTO Bruce Wang.

They sit in a pod of seven desks, Bruce in the midst of it, part of an open-plan office that houses many of Brightergy’s approximately 70 employees. Surrounding them are mainly operations employees: accountants, engineers, energy managers, project managers, estimators, and designers working quietly as the meeting noise rises and falls. One of them will occasionally laugh or chime in on the conversation happening in the R&D pod.

On one of the developer’s desks sits a group of thermostats. Each has been given the name of a team member, so that as they build out edits to their platform code, anyone can test and control the temperature of “Jessica,” “Samar,” or “Jonathan” at any given time.

Jessica Oakley, VP of Client Solutions, dives into the Analyze feature of the BrighterLink platform to show me Brightergy’s own data. She smiles, at home among the numbers. The platform has two key capabilities: Analyze—as in, energy intelligence—and Control—as in, control your devices, which include wireless thermostats.

Though we don’t own the building at 1712 Main, the numbers on the dash still tell a story about us. Brightergy occupies the sixth and seventh floors as its headquarters, with mostly meeting rooms and sales on the sixth; operations, a kitchen, and a break room on the seventh.

In fact, this office space is twice the space of both our previous office and combined satellite offices—for nearly a year before our official move, as we waited for our previously empty building to be remodeled, we rented additional office space for our business development team and officed most of our local operations team at our warehouse in North Kansas City.

That means that our energy usage jumped immediately once we moved in in January 2015. Bigger space, greater costs. BrighterLink was building behind the scenes, as we continued our focus on developing solar generation and energy efficiency projects. And while we installed LED lights and connected motion sensors, we weren’t yet solar-powered ourselves.

That milestone was a long time coming. Brightergy started out in a showroom space in suburban Lenexa, Kansas with a handful of employees in 2010. Then in 2012, we made the move to the Crossroads district in downtown Kansas City. Once there, our rapid growth (we were named 2013’s Fastest-Growing Area Business by KC Business Journal) filled our office with a growing employee base.

Summer 2015 saw a deal worked out between the Globe Building’s owner and Brightergy to install a solar-energy array on the roof. Between July and August 2015, we dropped nearly 7,600 kilowatt hours of energy consumption from the grid, using the solar power we were generating for the majority of our energy needs. 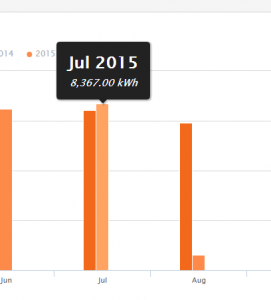 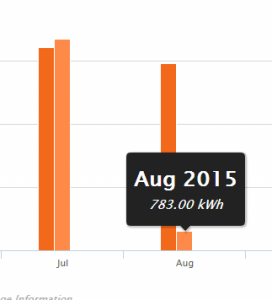 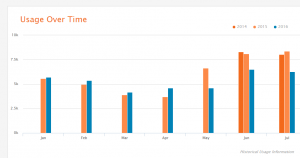 This should have meant that our costs went down in accordance with our usage. Yet 2015 was about 25% more expensive than 2014. This is due to a tariff change when we moved buildings. In 2014, in our old building, we had one meter and we were on a Medium General Service (MGS) rate. In our new office, we have two meters and each meter is on a Small General Service (SGS) rate.

What are our actionable insights from our energy data?

Even though our costs have gone up, they would have been greater were we not generating a portion of our own energy with solar. This information helps us verify the ROI of that project. In the future, we can evaluate and plan for other projects based on this data and the data we continue to collect. We can also go back and do a tariff analysis to see if it makes sense and would save us money to move back to a MGS rate for our current building. 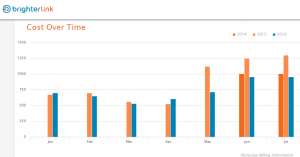