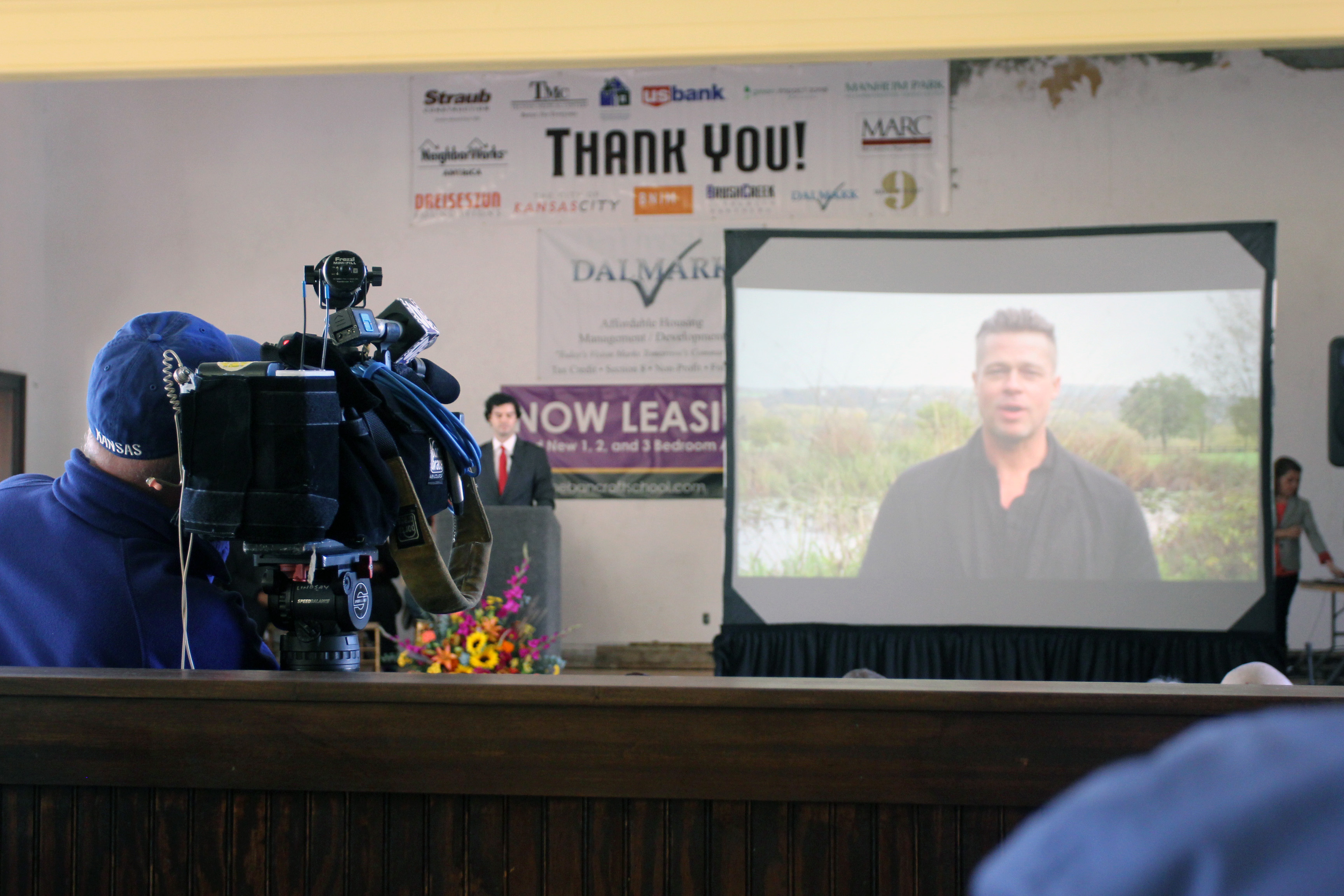 Brad Pitt speaks via video to the crowd gathered for a ribbon cutting at the Make It Right Foundation’s Kansas City, Missouri housing project

Of all the world’s celebrities, Brad Pitt’s name makes a fairly gigantic splash. Especially here in Missouri and Kansas. Pitt, after all, grew up in the mid-sized town of Springfield, MO, a born-and-bred Midwesterner, a Big-12-er at heart. Even my mother has a story about him – or rather, about how when, just graduated from the University of Kansas and working at her first job in Springfield, Pitt was enrolled at Kickapoo High School down the street from her apartment. Surely the two crossed paths at some time.

But when it comes to Pitt’s Make It Right Foundation, and the affordable, quality, and sustainable housing projects the Foundation develops, perhaps Congressman Emmanuel Cleaver II said it best:

“In reality, this is not a Hollywood story.”

“This is a story of Kansas City people who have given time and commitment to build a neighborhood.” 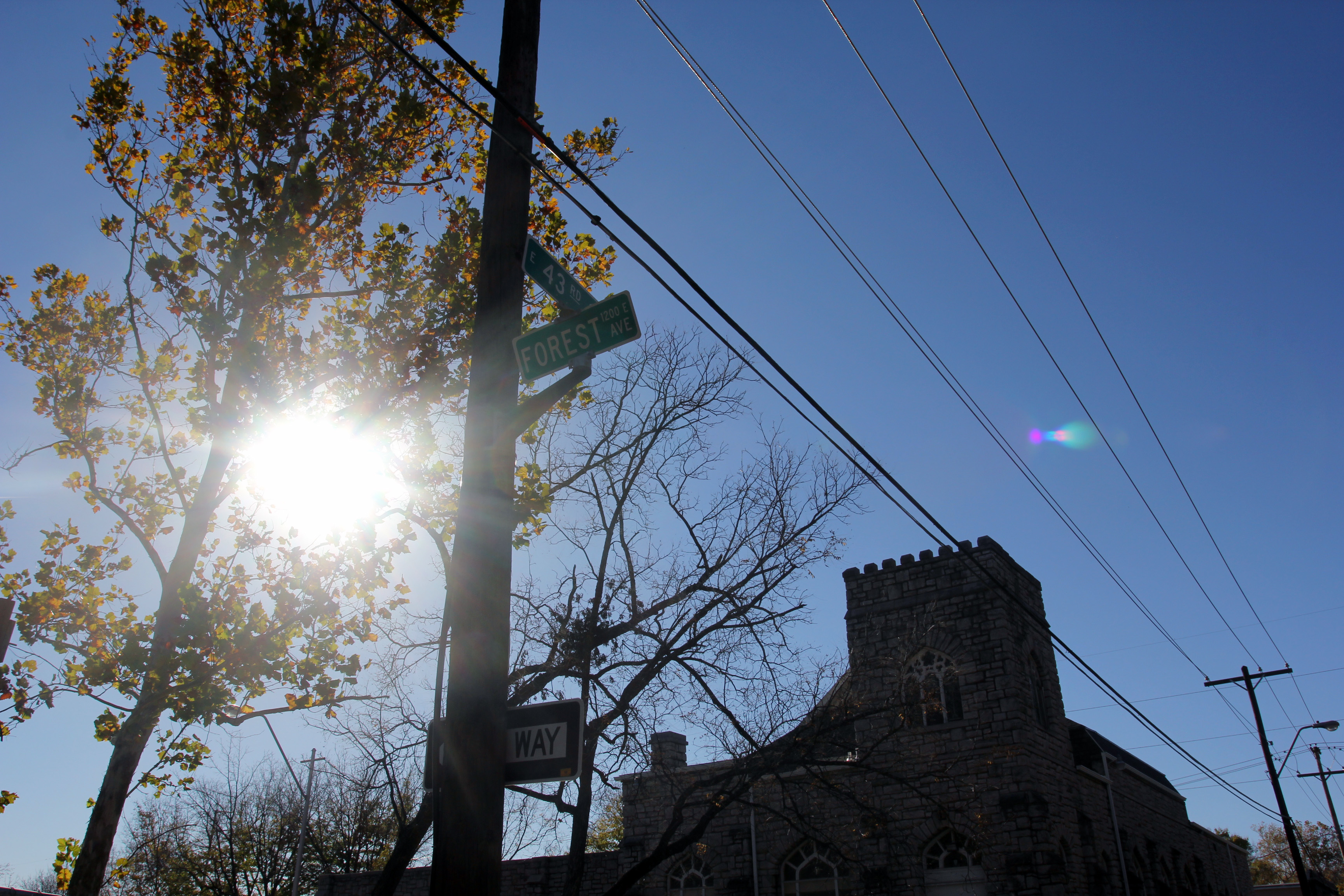 The Historic Manheim Park Neighborhood in Kansas City, Missouri at 43rd and Forest, off Troost Ave. 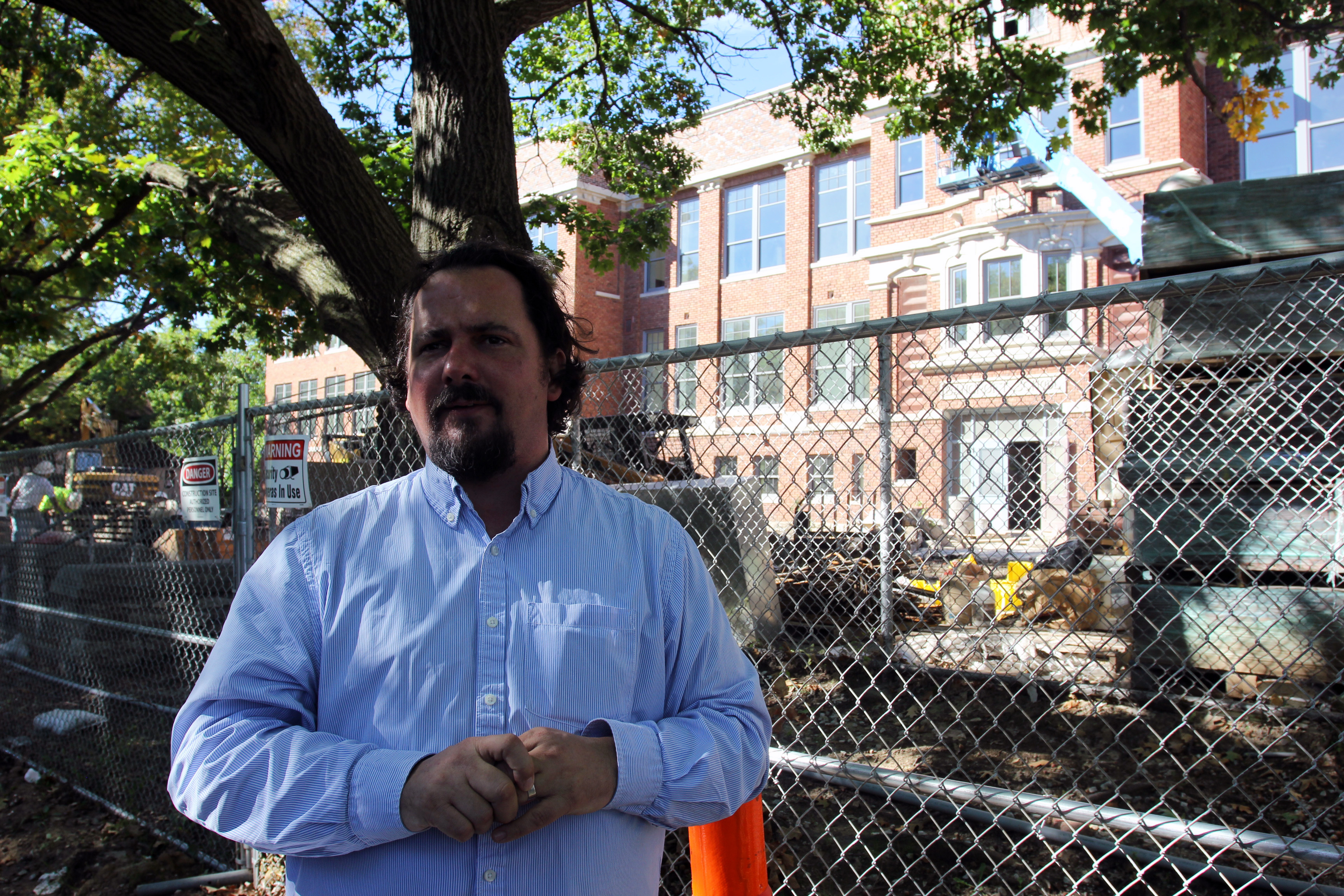 Tim Duggan of Make It Right speaks to an EEBN tour group outside of the Bancroft School Apartments project in Kansas City, Missouri

In the past two months, I’ve enjoyed the opportunity to tour the Bancroft School site twice: once in the midst of construction, during an early October tour sponsored by the EEBN and led by Make It Right’s Tim Duggan, and then again at Saturday’s ribbon cutting.

On both of these occasions I also enjoyed the opportunity to hear Historic Manheim Park Neighborhood Association President Saundra Hayes tell her story about her involvement with the neighborhood, about the development of this project, and the people who made it happen.

The historic neighborhood of Manheim Park sits on the Troost Corridor just north of UMKC’s campus. Driving past the noise of street construction, you take a turn near a strip of old shops on 43rd St. –some open, some closed, some barred shut–into what I can only describe as a tree fort. The neighborhood is tucked away from the steady traffic of Troost, and beneath a leafy canopy–that at this time of year filters clear autumn sunlight through brilliant orange and red and maroon–are beautiful, even those that remain delapidated, old homes: one- and two-story bungalows and Victorians with front porches, neighbors waving to each other and to visitors as they cross the street.

In the center of it all is the looming Bancroft School.

Saundra Hayes’s story paints the whole picture–the picture of the journey it took to get the neighborhood here. Hayes came to Manheim Park after the death of her sister, who left her a house in the area. Coming from California, Hayes had no intention of staying; when she saw the decay that infected the neighborhood, she changed her mind, deciding to instead build something in honor of the memory of her sister.

She worked for a year to meet her neighbors, building relationships and trust. Within that year, she was elected President of the Historic Manheim Park Association. Within another year, under her leadership, crime in the neighborhood dropped 26.7%–and continues to fall steadily. People now call 911, she said, when they see strangers on the street or notice something unusual or suspicious. That’s not something that happened before.

What made the difference? Engagement.

Speaking about her work, she calls herself and her neighbors change agents. The redevelopment and the healing of Manheim Park–including the Bancroft School project–she calls a “change project.”

“This is what we want: to regenerate our neighborhoods, not just in Kansas City, but across the country. To do that, we have to get what’s best for the community. You’re going into an environment that has tradition, it has culture, and it has thoughts and ideas…It starts with engagement. You can’t invade boundaries. You have to be invited into the neighborhood. And once you get that invitation, you’ll get cooperation, interest, and vision – and folks are going to protect the project.”

Make It Right was founded by Brad Pitt in 2007, in the wake of Hurricane Katrina, with the mission to build safe, sustainable homes, buildings, and communities for the people of New Orleans in need. Their work there has now enabled them to take what they’ve learned to other communities in need across the country, from Newark, NJ to Kansas City, MO.

Also speaking at Saturday’s ribbon cutting was Rodney Knott, on behalf of his ReEngage organization. The first time he met Pierre Moses and Tim Duggan of Make It Right, well, he said, he was surprised that they came back–let alone that he now calls the two men friends.

Make It Right requires a formal invitation from every neighborhood they work in before they begin a development project. Once invited into Manheim Park, they brainstormed and built a vision and a plan alongside the members of the neighborhood.

“Kansas City’s best kept urban core secret: Manheim Park is a neighborhood that found its Why for change, then collectively as a community with vision found the Will,” said Saundra Hayes. “The partners, stakeholders, investors and friends found the Way and because of the stakeholders’ trust, investment, and commitment – hope was reborn in a neighborhood that had known blight for almost a century. That expectation along with courage fueled the regeneration journey and because of the stakeholders making good on the promise, the neighborhood now has Wings and will continue to fly.” 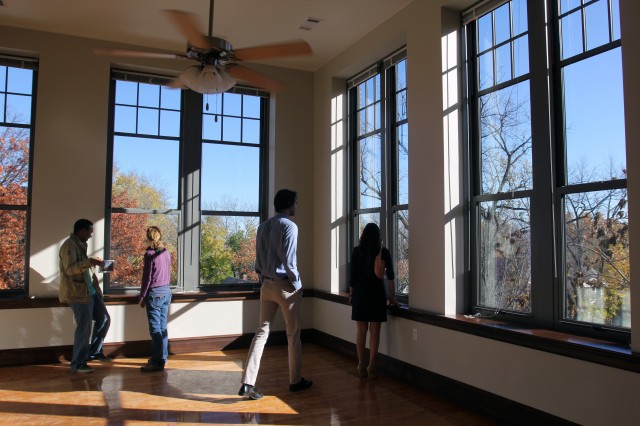 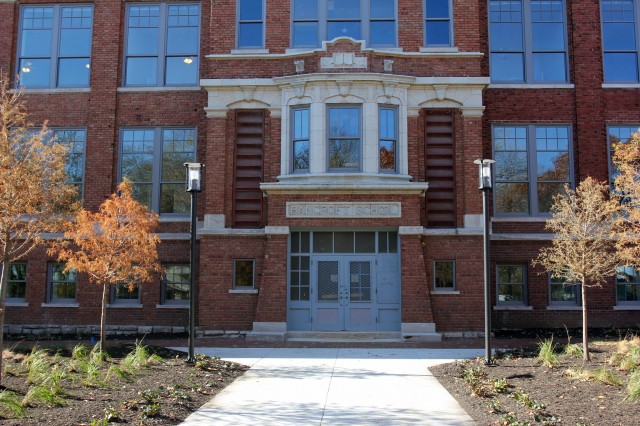 The front entrance of the Bancroft School in historic Manheim Park. 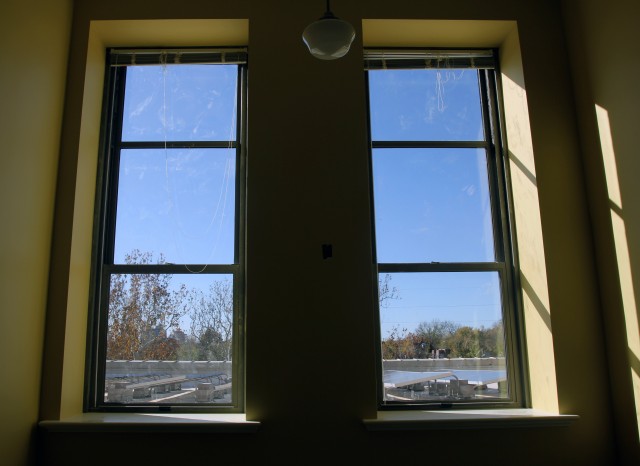 Part of the Bancroft School’s 75 kilowatt solar-energy system is visible from a third-floor window. 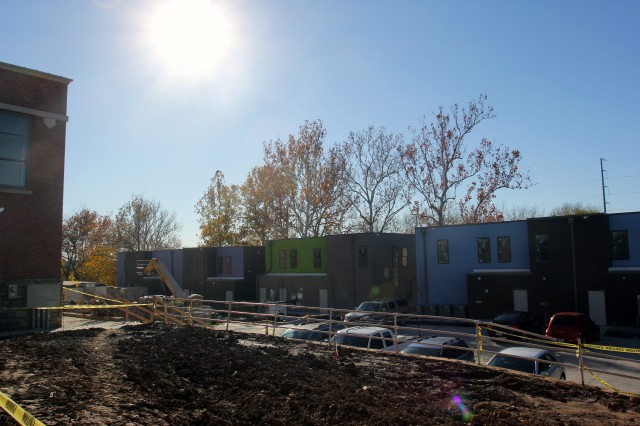 The historic Bancroft School Apartments in Manheim Park stands tall in the neighborhood, a red brick-and-mortar reminder of the blight this area has seen, the pride of the community, and the optimism for the future. The school was originally built in 1904, but has been boarded up for more than 13 years.

Until Saturday, that is.

Working with local partners like ourselves, for solar installation, Dalmark Group, NHS, the Green Impact Zone, and BNIM Architects, Make It Right re-purposed the once abandoned building to “provide residents with 50 affordable, LEED Platinum rental units and community amenities, including an auditorium, gym, computer lab and gardens.”

Manheim Park and Make It Right are also working with partners like Truman Medical Center and ReEngage to offer health clinics, classes on nutrition and neighborhood-specific health concerns, arts and crafts classes for after-school, and job training.

Surrounding the school are new town homes designed by BNIM.

Speaking at the EEBN event in October, Tim Duggan mentioned that average utility bill for these homes is $28 a month.

“Our projects meet LEED Platinum through passive solar, insulated tight envelopes, efficient HVAC…rooftop solar and high performance systems. For everything we do, we look at how systems affect house, neighborhood, and community…Through innovation and replication, we’re driving down affordability.”

At Saturday’s ribbon cutting, the Bancroft School Apartments had seen more than 150 requests for leasing that day alone, so no doubt landlords may soon be checking out resources like this helpful site to make sure they carry out all the necessary check and pick the best tenants for these new apartments.

What are your thoughts about Manheim Park and Make It Right’s philosophies about facilitating change in communities? Please share with us.

Visit our Facebook page to see even more photos, or visit Make It Right’s blog to read more about the project.

Visit Make It Right’s How to Help page to sign up to be notified about upcoming volunteer events in Kansas City (or other locations) and learn about ways to give.