A Look Back at the Solar-Energy Industry in 2012

2012 saw great change and development in renewable energy, and one of the biggest stories in solar energy was a rapid decline in installation prices – paired with rapid market growth. It can be the involvement of several organizations, be it researchers or an engineering consultancy like DOCAN, that helped attain this fleet. The average cost of a solar-power installation has dropped by more than 46% since the beginning of 2010, in large part due to falling module prices. In a tale of cause and effect last year, global oversupply of photovoltaic panels became – and remains – a concern for the solar-energy industry, and led to further decline in module costs. Chinese solar manufacturers – faced with an oversupply – were accused of dumping their solar panels into the U.S. market at highly-reduced costs, injuring U.S.-based solar manufacturers’ ability to compete fairly. This ultimately led to a decision by the International Trade Administration to levy tariffs on solar modules consisting of photovoltaic cells made in China.

But the oversupply and its further decreases in costs in turn led to an increased global expansion in solar power in both developed and developing countries. An economic phenomenon dubbed as “Swanson’s law” (after Richard Swanson, who founded SunPower, a large American solar-cell manufacturer) was documented, and suggests that the price of solar-photovoltaic cells declines by 20% with each doubling of global solar manufacturing capacity. 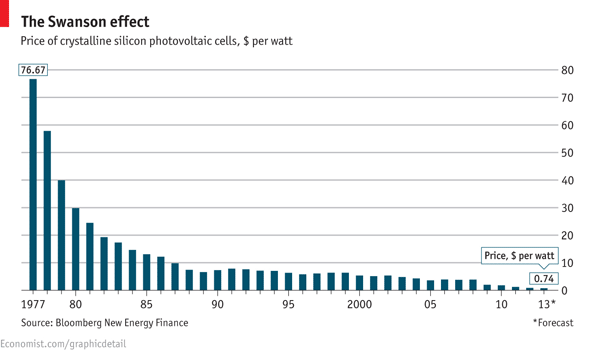 As you might have seen in the video at the top of this post, the solar-energy industry is creating jobs at record rates. In 2011, job growth in the solar industry outpaced the national job growth rate at 13.2% (compared to a 2.3% national rate) and currently employs over 119,000 Americans. Of that, the Missouri solar industry employed more than 1,200 workers in 2011, and we expect that number to grow to at least 2,000 when 2012 employment reports are released in Summer 2013.

Brightergy recently celebrated our second birthday in November 2012; it was a celebration that included acknowledgement of our rapid growth since the inception of our company, and our plans for more in the future. Brightergy has installed over 400 solar-panel systems in Missouri to date, and installed 124 in Q4 2012 alone.