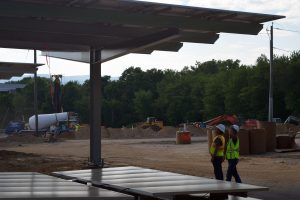 Everything about UMass Amherst is big. Their nearly 1,450-acre campus is home to 30,000 students during the school year (yeah, my college had just over 2,000 students). Their campus is so big, they have their own zip code-and their own police department (they share the fire department with the town of Amherst). There are more than 7 million items in their library system and their research expenditures totaled $200 million last year. They’ve built 2.4 million gross square feet of new facilities in the last 10 years.

And now we’re building them New England’s largest campus solar-energy system, which just so happens to also be the largest project we’ve ever built.

I traveled to Amherst the other week to meet with a variety of people, but as soon as I stepped on site, my mission also included sharing the story about the installation progress made so far. There are a million cliches for it-a picture’s worth a thousand words, seeing is believing, etc., etc.-but it’s really true that it’s hard to get a sense of scale for this project from our desks.

And this is important-those two parking lots cover 12 acres, with Lot 44 (in construction now) being the largest of the two. When completed, it will host 2.5 MW in solar canopies.

In fact, when you first walk onto Lot 44, you can’t even see just how far it expands.

We have a number of team members who have been spending time on-site. There are steel crews, concrete crews, and lots of electricians. Some aspects, like parking barriers, are yet to be decided on, though we have been looking at details on UK options to get some inspiration. Existing pole lights had to be removed before we could begin.

Prior to construction on the land site, soil testing and strata inspections may be necessary to determine the soil’s strength and its ability to support the superstructure. It is possible to execute these processes with the help of an experienced strata consultant such as Michael Teys. Once the soil test has been done, 20-foot-deep holes have to be dug into the ground to support the steel canopies, which also had to be engineered tall enough to allow snow plows to be able to go under them. The construction of these steel canopies and supports could have been made much easier by the crew looking to utilize steel building kits, however, the requirements were very bespoke to be able to use pre-designed kits this time around. 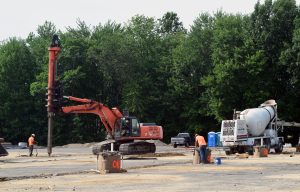 And a massive trench had to be dug to connect the parking lot solar canopies to UMass’s grid. 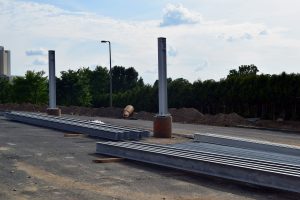 It is a huge undertaking, especially because UMass really wants this parking lot completed by Sep. 2 for students to use. Therefore, if need be, additional crew such as Wisconsin Concrete Core Drilling Services or someone similar (from nearby) that can handle drilling, concrete and like works can be recruited to finish the work on time. 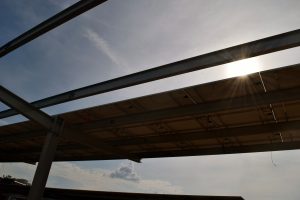 Lot 25 is by the Mullins Center, where the UMass basketball and hockey teams play. Directly across from the campus Recreation Center, Lot 25 is also where our “Learning Lab” will be. At this lot, students and faculty will have a unique opportunity to visit a working solar array and gather for discussion about solar energy in the real world. They’ll be able to view all the parts of the array-from panels to inverters to disconnect-as well as see the solar generation data in real time. 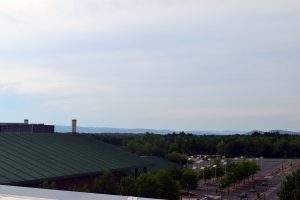 Construction at this lot begins soon, and when I was there, they had fenced it off and had begun breaking into the concrete to prepare for digging.

On the other side of the Mullins Center, is the Champions Center-the Minutemen’s basketball practice facility and home to one of our rooftop arrays, currently in construction. One of our project managers, Elia, took us up on the rooftop of the Recreation Center (future home to an array) so we could see installation in progress.

Nothing here yet, but it is one big roof. 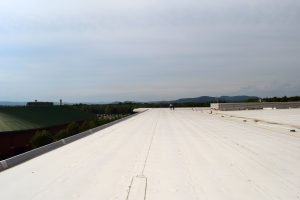 This is a new building with lots of energy demand-all that whirring hardware-with a pretty view. The array here is complete.

This one is complete as well. When I was there, Elia and another project manager, Jeff, tested it out and produced the first kilowatt. This rooftop has two levels.

UMass wants this building, along with the Lot 25 Learning Lab, to be the centerpiece of this project. 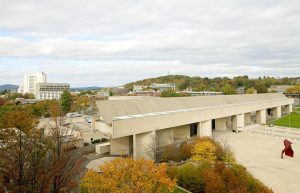 Originally born as the Massachusetts Agricultural College, the school became Massachusetts State College in 1931 and then after WWII, the GI Bill led to a campus growth spurt and the new and ambitious name, the University of Massachusetts. As the school grew into a large public research institution, the university leaders wanted to establish a different look than the traditional private New England school.

Thus they ushered in a modern architecture during the 1960’s and 70’s, including the Kevin Roche-designed Fine Arts Center. And along with the other hulking Brutalist concrete structures around campus, the design has been subject to criticism and complaints. But while around the world these buildings are being torn down and replaced, UMass is instead choosing to honor the architecture and preserve the buildings.

And the flat face of the Fine Arts Center will soon be gleaming with solar panels, ushering in a new modern era.

It’s not one that hasn’t come with design challenges. We’ve had to build custom scaffolding to access the roof, as well as custom racking that will minimize the holes made in the structure.

When it’s completed, however, it will be a campus focal point and a long-term display for our work here and the campus’s commitment to sustainability and distributed generation.