In the February 2013 issue of The Voice 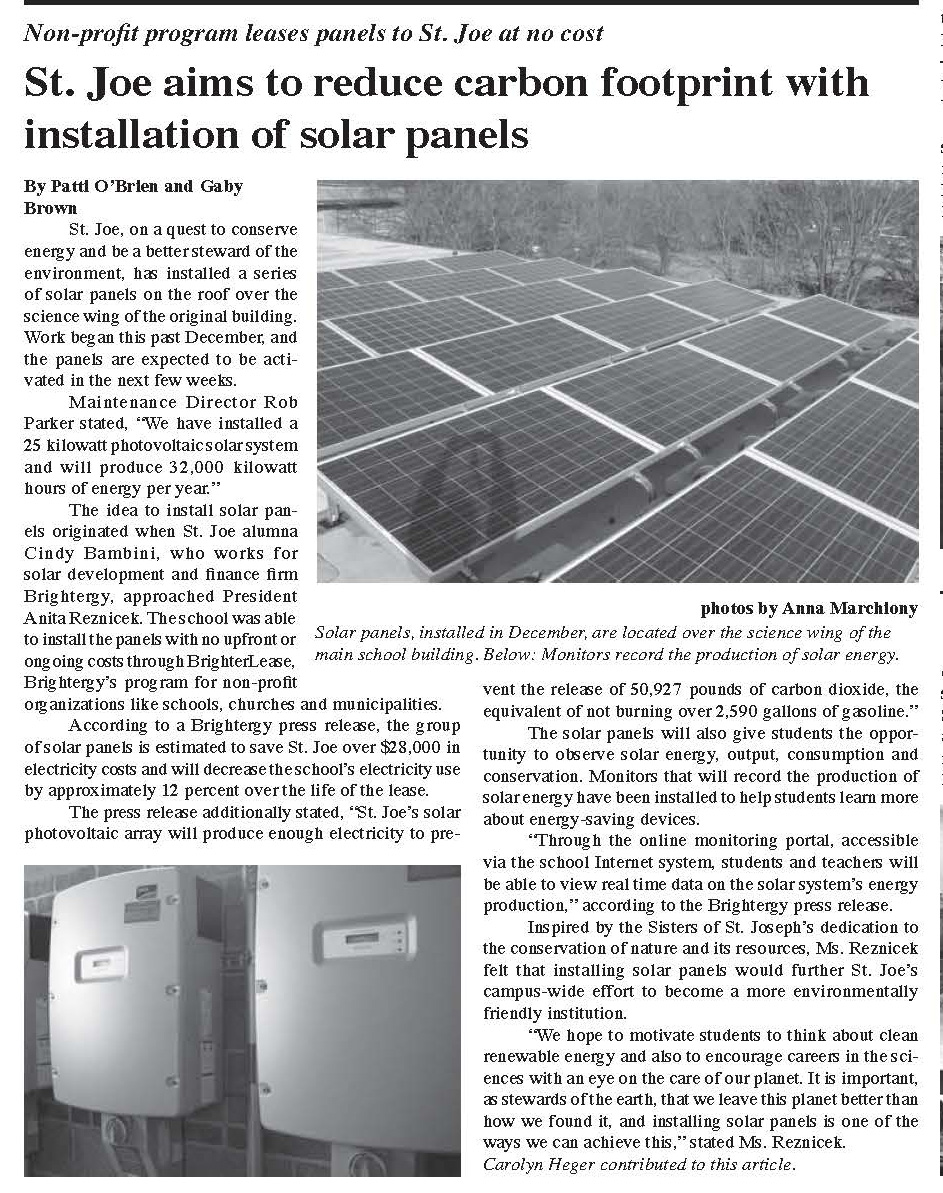 Non-profit program leases panels to St. Joe at no cost

St. Joe aims to reduce carbon footprint with the installation of solar panels

By Patti O’Brien and Gaby Brown

St. Joe, on a quest to conserve energy and be a better steward of the environment, has installed a series of solar monitoring systems on the roof over the science wing of the original building. Work began this past December, and the panels are expected to be activated in the next few weeks.

Maintenance Director Rob Parker stated, “We have installed a 25-kilowatt photovoltaic solar system and will produce 32,000-kilowatt hours of energy per year.”

The idea to install solar panels originated when St. Joe alumna Cindy Bambini, who works for solar development and finance firm Brightergy, approached President Anita Reznicek. The school was able to install the panels with no upfront or ongoing costs through BrighterLease™, Brightergy’s program for non-profit organizations like schools, churches, and municipalities.

According to a Brightergy press release, the group of solar panels is estimated to save St. Joe over $28,000 in electricity costs and will decrease the school’s electricity use by approximately 12 percent over the life of the lease. It’s no wonder solar panels are becoming so popular! Homes and schools without solar panels can still find the cheapest prepaid plans so that they can save some money, just like they would if they were to have solar panels installed too.

The press release additionally stated, “St. Joe’s solar photovoltaic array will produce enough electricity to prevent the release of 50,927 pounds of carbon dioxide, the equivalent of not burning over 2,590 gallons of gasoline.”

With there being many ways to reduce carbon footprint, St, Joseph Academy has decided to implement the use of solar panels. This will give students the opportunity to observe solar energy, output, consumption, and conservation. Monitors that will record the production of solar energy have been installed to help students learn more about energy-saving devices.

“Through the online monitoring portal, accessible via the school’s Internet system, students and teachers will be able to view real-time data on the solar system’s energy production,” according to the Brightergy press release.

Inspired by the sisters of St. Joseph’s dedication to the conservation of nature and its resources, Ms. Reznicek felt that installing solar panels would further St. Joe’s campus-wide effort to become a more environmentally friendly institution.

“We hope to motivate students to think about clean renewable energy and also to encourage careers in the sciences with an eye on the care of our planet. It is important, as stewards of the earth, that we leave this planet better than how we found it, and installing solar panels is one of the ways we can achieve this,” stated Ms. Reznicek. Carolyn Heger contributed to this article.