by Rachel Simmons and Alex Norman 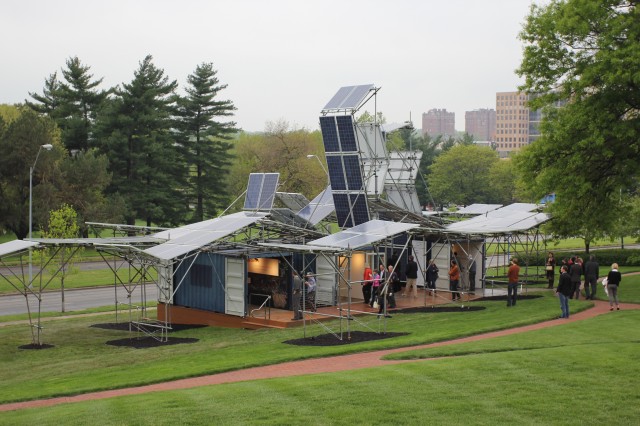 Generator Studio’s Sun Pavilion, on display at the Nelson-Atkins Museum of Art, deconstructs the way solar panels are viewed – and puts the solar system on display for all of us to see (and learn from).[/caption]

Have you ever seen one of those clear phones? The old kind-the handheld, corded kind-whose transparent outer core allowed for a view into the inner works of the telephone: a complicated system of tiny, colorful wires, worming intricately around each other, connected to a the steady blink of tiny circuits.

I never had one; in my preteen years, I had a neon Slinky phone and then later on in high school, presumably as my phone calls grew more serious, I used a vintage replica from Pottery Barn that lent the elegant feel telephones possessed in my favorite Cary Grant and Grace Kelly films.

But, those clear phones made an impression on me, and I never forgot how intricate their systems were beneath their plastic veneer.

If you’ll recall, the other week we addressed how often – or more often, how little – we think about where our electricity comes from, and how our current installation at the Nelson-Atkins Museum of Art addresses energy education visually. One of the goals Generator Studios aimed to achieve was the same kind of transparency found in those old clear phones – opening up the inner workings of solar photovoltaic power, for those of us who aren’t the kind of kids who take their robots apart to see how they work. 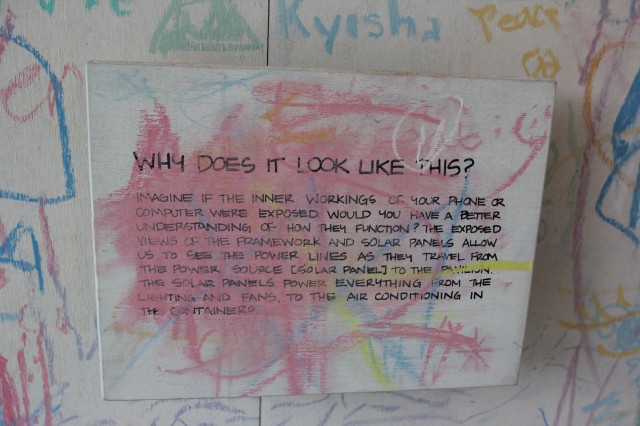 Inside the air conditioned cube, the Sun Pavilion’s creators ask, “Why Does It Look Like This?”

“Imagine if the inner workings of your phone or computer were exposed,” the sign reads inside the air conditioned container. “Would you have a better understanding of how they function? The exposed views of the framework and solar panels allow us to see the power lines as they travel from the power source (solar panel) to the Pavilion. The solar panels power everything from the lighting and fans, to the air conditioning in the containers.”

So just how does that solar power work, traveling from photovoltaic solar panel to climate control?

According to one of our very own, solar designer Alex Norman, “There are three main properties that allow electricity to work: voltage, amps, and resistance. When working together inside a circuit, these properties allow electricity to move from place to place – a process that begins when an atom’s electrons are stimulated, and made to move in a current or flow.” A lot like water, really. Most metals – gold, silver, copper, aluminum – are perfectly suited as conductors of electricity, as their atoms don’t hold their electrons close to the nucleus. Materials like glass, plastic, and air do – and by this makeup, they actually obstruct the flow of electrical current, earning the name insulators.

Just like water, in order for electricity to flow in a current, there must be some sort of force or pressure pushing the electrons along: called electromotive force, or voltage. A circuit carries this electrical current between the source – in the Sun Pavilion’s case, the 30 active solar photovoltaic panels – to the load – for example, the light bulbs and air conditioner in use at the Sun Pavilion. Additionally, there should be a switch in the circuit too. This will allow people to break the circuit or change connections, so most circuits will include something like RAFI’s sealed selector switches. Hopefully, this will make it easier for people to manage the electrical energy in the circuit.

These electrical sources also possess both positive and negative terminals, using the negative terminal to push electrons along the circuit, which is routed by wire to the load, which then runs back from the load to the positive terminal on the source. That force, then, that is applied by the source determines the amount of voltage running through the circuit; the amperage – amps, or current – is determined by the number of electrons flowing through.

The last piece of the electricity puzzle has to do with the kind of resistance working against the amps, or electrical current. Back to our water metaphor: when water flows through a pipe, the larger the pipe, the easier it is for water to flow through. The electrical current flows faster if large wires are used in your circuit versus narrower wires.

There are a million different uses for electricity, which makes it the most versatile form of energy available. These three properties – voltage, amperage, and resistance – can be applied in countless ways to any and every material that conducts. The way Alex sees it, “harnessing and controlling the power of electricity can be viewed as mankind’s greatest achievement. The opportunities for its use are endless, however, the current source of its generation – fossil fuels – are not. Fortunately for us, the answer to this problem of finite supplies of fossil fuels can be found in the very thing that created this resource millions of years ago – along with all life on earth – the sun.”

So what do you think? If you haven’t been to see the Sun Pavilion, this solar panel installation will be on display at the Sculpture Park at the Nelson-Atkins Museum of Art through August 19 – when the solar panels and other pieces will be broken down for re-use in other projects.

Stay tuned for the next post in this series in a few weeks, when we break down how solar energy works – specifically, how the Sun Pavilion’s solar panels convert from DC to AC.