Missouri’s “greenness,” and how solar makes an impact

Here in Missouri, our solar industry is growing quickly. But what about our overall “greenness?”

The quality of our air can be a little like our electricity: we don’t often think about it, until there’s a problem. And while Greentech Media reported yesterday that there’s one solar-energy system installed every four minutes in the U.S. (good news for sure), there’s another less savory stat: 48,000 tons of carbon dioxide are still emitted into the atmosphere every four minutes.

And unfortunately, Missouri is rate one of the worst states in air quality.

MPHOnline, a website providing information on public health, recently rated states according to their “greenness,” as seen in the infographic above.  They used seven categories to come up with their rankings: mass transit, use of renewables, recycling, water quality, air quality, gas, and Co2. Those were then combined to come up with states’ overall rankings.

Overall, Missouri’s in the middle of the pack, which is neither good nor especially bad. Renowned for our water quality, we took a top ranking (#12) in that category. A state of drivers, we’re very nearly the worst (#49) in public transporation, and not much better (not unsurprisingly) in gasoline consumption (#42). But we’re hanging in there (#25) when it comes to recycling.

As for our air quality, there’s definite room for improvement. MPH gave Missouri a ranking of #38, due to the 132,096 metric tons of carbon dioxide emissions we release each year.

And in a collaboration with Column Five, website GOOD.is put Missouri in the “Toxic Twenty” for our part in toxic air pollution from the electric sector alone. 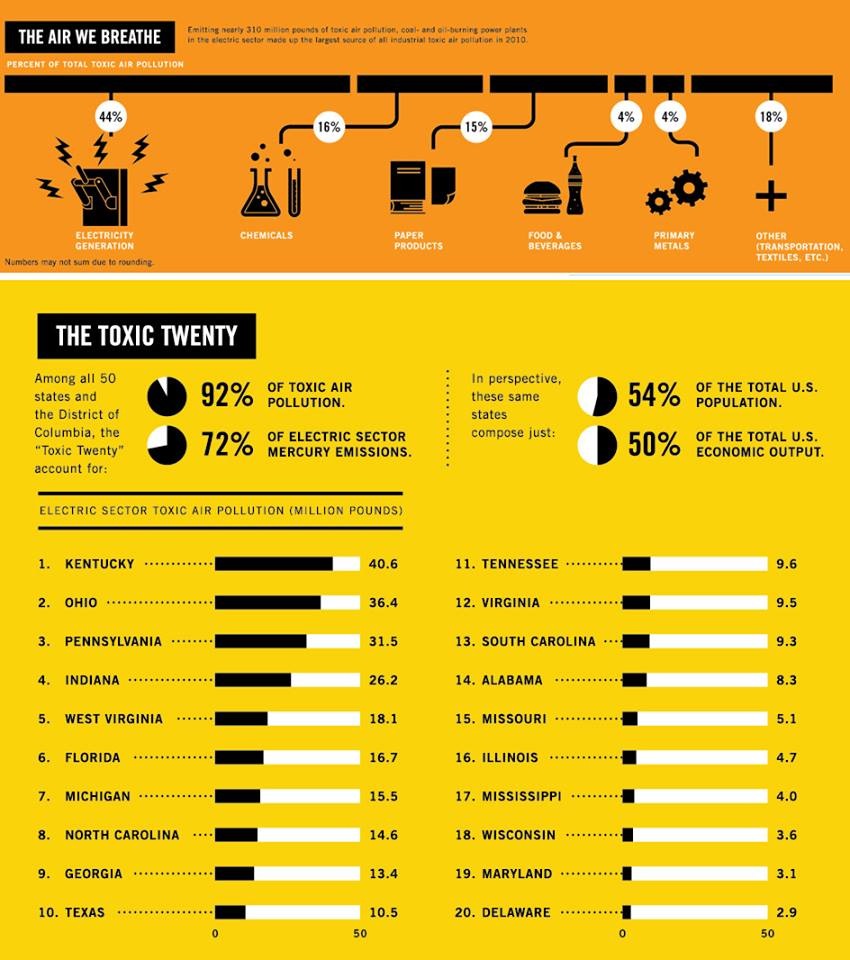 According to their infographic, we produce as a state 5.1 million pounds in air pollution each year. Together, the Toxic Twenty represent 92% of the U.S.’s toxic air pollution, and 54% of the total U.S. population.

So what can we do to improve the quality of our air, and breathe easier?

1. Install more clean, renewable energy (though you knew that already).
2. Cut down on our electricity use. Both of these ideas ultimately save you in energy costs too.
3. Limit your use of items emitting VOCs. At your workplace, establish a policy that limits paints and stains to low-VOC.
4. Keep your tires in your car properly inflated and aligned.
5. Fill your gas stank during cooler hours of the morning and evening, to cut down on evaporation. Avoid spillage, and don’t top off your tank.
6. Recycle paper, plastic, glass, cardboard, and aluminum (doing this conserves energy and reduces emissions released during production)
7. Plant deciduous trees where you can, but especially in places where they provide shade during the summer, but light during the winter.

Get even more ideas from the EPA at their website. What’s another area you think Missouri needs to work on improving, in terms of “greenness” and sustainability? Share with us in the comments section below.