How the Most Successful Small Businesses Treat Everything as an Asset 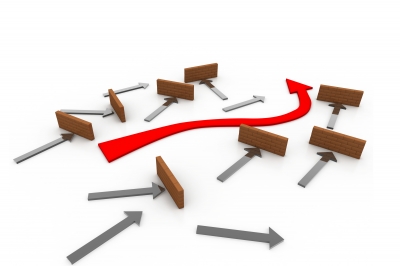 I’m an optimist by nature. A cup-half-full kind of girl. I expect a plan to always work out.

Sometimes this means I’m surprised when they don’t. But very often, this optimism is accompanied by a dogged desire to just keep trying (or just keep swimming), even if it means pivoting.

Last month in Forbes, Paul B. Brown – one of the coauthors of Just Start – wrote an article entitled, How the Most Successful People Treat Everything – Including Problems – as an Asset (a Case Study). This caught my eye for two reasons: one, it was a great title and it called to my optimistic nature and two, it resonated with what Brightergy believes energy can be.

Brown began his article by throwing out popular management cliches: push the envelope, herding cats, etc. Except for one: “There are no such things as problems; only opportunities.”

The world, which has always been unpredictable, is becoming increasingly more so. That means that your odds of moving smoothly from A to B are going to steadily decrease over time, creating more and more situations that you simply could not anticipate.

I can’t argue with that. And don’t the Boy Scouts always say, always be prepared? Only in this case, it’s more like accepting the fact that you can’t always be prepared and just going with it; realizing that your best preparation strategy is to take the surprises as they come – even problems – and be agile enough to create something positive out of them.

Brown continues on this point:

…in today’s world, it is all about exploiting the contingencies and leveraging the uncertainty by treating unexpected events as an opportunity to exercise control over the emerging situation.

How the Four Seasons Turned a Problem Into an Advantage

His example is of Isadora Sharp, founder of the Four Seasons hotel chain. While not a small business by any means, Sharp’s problem is a perfect example of running into a surprise that – because of his agility – became the Four Seasons’ competitive advantage:

When he started out, he assumed that the only thing that would matter for him was to be in the best locations. The problem he ran into was that every other hotel chain had the same idea. That was a huge negative surprise. If you are doing what everyone else is, you don’t have an advantage.

So what did Sharp do? He discovered that by offering supreme customer service, he could make his people the advantage – especially when paired with premium locations.

‘Three decades ago, we had decided that what our customers most desired was whatever would make time away from home the most pleasurable and productive, so we set about raising service levels to match our first-class decor, a historic judgment call that had made superior service the major determinant of hotel profitability and competitiveness, and while finally recognized now by every hotel company in the world, we had a long head start…’

To Brown’s point, Sharp took what could have been a major set-back and instead turned it not only into an opportunity, but into a clear, competitive advantage – eventually setting the standard for first-class hotels across the world.

It is undeniable that running this successful business would not have been possible without having extreme organization over all aspects of the business. Objective & Key Results management is one such tactic Sharp could have used to get this level or organization. Sharp must have spent many hours setting clear goals and sub-goals for his hotel team to achieve if he did. Nowadays there is Profit OKR Software available to help businesses achieve their goals and grow without spending much time on the planning aspect.

Finances would be another area that Sharp would have kept a tight grip on to achieve success with the Four Seasons. Many companies choose to have merchant accounts, which are used to hold payments from your company including all the transactions until they are then distributed into your bank account. It is a way for a business to monitor what they are spending compared with the money they are receiving, in order to work out profits and how much money they can put back into the business. It is important to learn the truth about “free” merchant accounts, as they are mistakenly used by businesses, small and big, with the illusion that no fees will be charged. This is wrong so staying informed and knowledgeable about finances is a way a business can develop astronomically into the same success as Paul B. Brown. With that being said, external accountants can be extremely useful at managing finances, particularly for small and new businesses; they can reduce the margin for error. It is always worth having a look at online accountants like Wizz Accounting – they are an affordable online accountant.

Running headlong into a problem and then solving it can give you a barrier to competition, or at least a remarkable head start in the marketplace. Why? Because you acted, and the competition didn’t. As a result, you know something they don’t.

So how does that relate to energy?

The way we see energy, we all depend on it. Electricity is a necessity, a utility, a bill. But with clean, renewable energy, it can be controlled in every aspect: production, consumption, and distribution. And it can not only lower your electric bill, but also lower your tax bill. This gives you more room in your margins and most importantly, control. And by taking control over what was once a necessity – and an expense – you’ve now made it into an asset.

So the question is this: how do you see your energy use? As something you can do nothing about, or as something you can turn into an asset? The surprise here may be that electricity can be used for your small business as something other than what it is: an energy provider, making sure that what you do everyday can get done. But by thinking around that problem, and by taking control over your energy costs and production, you just may figure out something your competitors don’t know.

What do you think? What are problems you’ve had that you’ve been able to turn into opportunities? Share with us in the comments below.