Could Your Next Car Be Solar Powered?

“Scotty, I’m taking the solar-powered car for a spin.” That’s something you’ve probably never heard on Star Trek. Or anywhere for that matter.

A solar-powered car may sound like something straight out of science fiction, but to people familiar with the American Solar Challenge (ASC), it’s actually old news. For over 20 years, engineering students from universities around the globe have been hitting the road in the ASC cross-country race – and on Friday, they made a stop at Black and Veatch in Overland Park.

This year’s race started in Austin, Texas. 17 teams trekked from the Lone Star State with their sights set on the finish line in Minneapolis, Minnesota. The course, which is broken up into several different legs, takes contestants over 1700 miles across seven states in eight days. Of the original 17, only eight teams remained to pull out of Black and Veatch Friday morning heading up Highway 75 to Omaha. I was lucky enough to catch up with Iowa State’s “Team PrISUm” who held the third place spot heading into the Nebraska leg.

“We call it a lifestyle,” said engineering major Dylan Neal, “because we spend so much time on this project, it really becomes a part of us.” And he wasn’t kidding. Neal has been working towards this day since he first stepped on campus in Ames a year ago. Other members have been working even longer. From designing new components to test races, PrISUm has spent thousands of hours working towards this day. And with their solar car “Phaeton” sitting pretty in the top three, it’s hard to argue with the results. Until solar-powered cars are gracing all of our streets, there are sites like Zemotor that people can look to, to find the right used car for themselves, they may not be solar-powered but they will get you to where you need to be, we aren’t driving in the sky just yet. 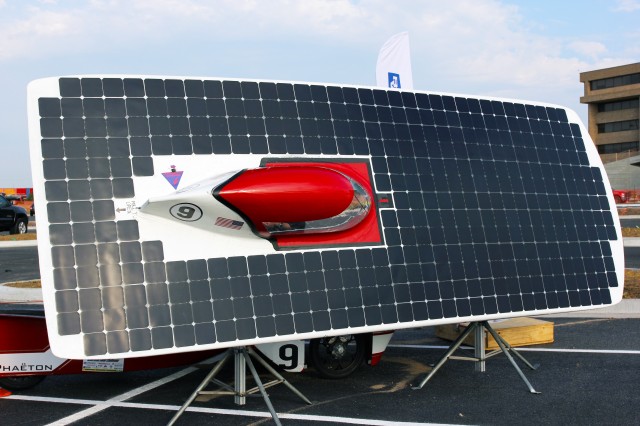 Solar racing was an entirely new concept for me, so I had a lot of fun checking out “Phaeton” and the technology behind it. Neal explained that the car was a modified version of another Iowa State model named “Hyperion.” “We switched from fiber-glass to a carbon fiber frame, which took almost 100 pounds of weight off. Carbon fiber is more durable too, so it was a good move.”

With speed as an ultimate factor, there are no added frills to Phaeton. Underneath the silicon solar array, the car roughly resembles a 90’s-era go-kart. Metal support rods crisscross the driver’s legs, encasing a lithium-ion battery pack at the front. The carbon fiber mold attaches to the undercarriage, housing three custom-made wheels that attach to an impressive suspension system. Phaeton’s top is crammed with monocrystalline solar modules, with a futuristic-style driver’s cab attached towards the rear.

Don’t let the simplicity fool you though. The car can reach speeds up to 70 miles per hour, and costs more than your average Lamborghini. “Everything totaled up, we’re looking at around $500,000 right here,” said Neal. As you can see, it’s not quite suitable as a consumer car, with the technology only being suitable for driving short distances. So, if you were thinking of selling your car here in favour of a solar-powered model, you might want to find something else to get you from A to B. 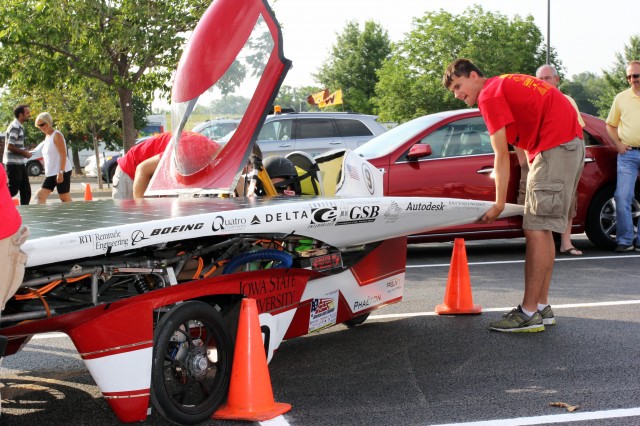 ISU Team members getting Phaeton ready for the starting line 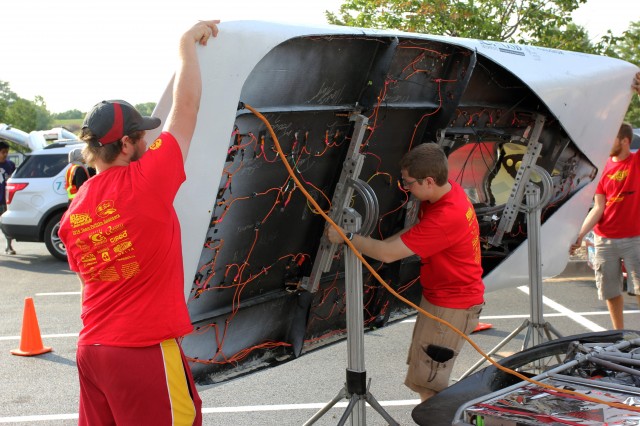 “Team PrISUm” members recharging Phaeton for the trip to Omaha.

Driving Phaeton is a whole different story though. Time and Energy management is a very difficult game to play. Team drivers have to mix a substantial amount of science with a whole lot of finesse to be successful in the ASC. Any kind of damage to the modules or the vehicle on the road could cost the team precious time in repairs. Pit stops are few and far between, and weather can play a significant factor. If a rainstorm comes up, teams have to decide whether to slow down and conserve energy, or risk using precious solar power to outrun the storm and find the sun on the other side. And heaven helps them if it starts to hail. While anyone can search for a “dent removal near me” and fix hail dents to a normal car, similar damage to a solar panel could render it inoperable. Perhaps challenges like these are why solar-powered cars have remained a unique niche in the world of automobiles.

However, whilst solar-powered cars, for now, might be remaining a small niche of the sustainable car industry there has in recent years been an increase in interest in electric cars as an alternative to fossil fuel ran cars. They do offer many benefits for the environment, although, one downfall of them could arguably be that at this point in time the price. However, when it comes to the benefits that they offer, they are comparatively more effective these days. There might be small maintenances that you might have to take care of occasionally like topping the car batter with distilled water 5l, for instance. But, taking into account what they provide to the current economical market, relying on them is prudent. That said, for some people, an electric car might be too expensive for them to purchase. There are tools such as a car invoice calculator which you might be able to click here to find out more about, or a dealership might be able to offer certain price plans and discounts. Hopefully one day they might become more purchasable for the average person, in the meantime, though they remain a more suitable option compared to the niche of a solar car.

These students immerse themselves in real-life problem-solving situations in a cross-country race during summer vacation. They give up countless hours where others would rather be studying or catching up on Netflix. All without college credit. “It’s all about experience for me,” said Neal. “I get the opportunity to learn different skills in a real situation. That’s what’s most exciting.” 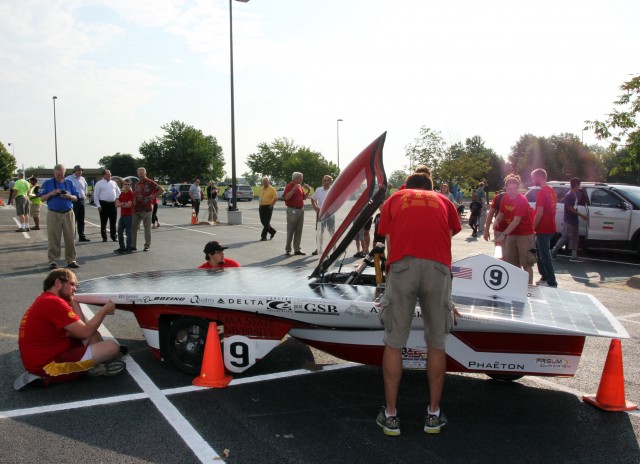